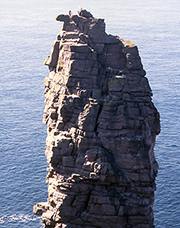 Rhue Sea cliffs
Rhue sea cliffs are situated at the end of the Rhue road which leaves the main road 3 miles north of Ullapool. There are approximately 40 routes grading from difficult to E4 and several good bouldering circuits of all grades. As a west to north-west facing cliff, the main cliff takes a while to dry but Gernwalls tend to dry quickly.

Ardmair
4 Miles north of Ullapool, park by entrance to fish farm. Walk up glen: crags can be seen from the road. There are about 100 routes grading from difficult to E6 mainly on steep, good quality sandstone. Crags face south-west and tend to dry quickly. The climbing tends to be of a brutal nature.

Reiff
Take the road to Achiltibuie 8 miles north of Ullapool. Follow road to junction for Reiff which is at the western point of the Achiltibuie peninsula. Reiff consists of several geos giving routes of 5 to 50 metres on good quality sandstone. Grades go from difficult to E7. There are at least 300 routes spread along 5 miles of coastline. Great place to climb with a lot of starred routes.

Mountain Climbing and Walks
The north-west has some of the most stunning mountains in Scotland containing beautiful ridge walks and great rock climbing. Winter climbing is available depending on weather conditions. Mountain and climbing guides can be bought locally from North-west Outdoors in Ullapool.